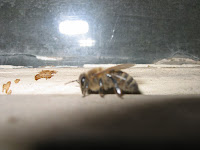 Yikes....been crazy busy and too hot to sit in the corner and update this blog but it must be done! What do I hear everyday in the kitchen? Buzz Buzz... well the sound of busy buzzing lil' honey bees, of course! Recently there was some construction going on up the road from us on an abandoned home. Within 24 hours of construction there was suddenly a swarm of bees outside the kitchen window looking for a place to call home. They managed to find a small hole in the siding that apparently was left from some old wiring or something. After totally freaking out not being sure they were honey bees, I killed one to get a better look. Sure enough they're good old honey bees! We tracked down a "Bee man" named Joe who was able to come over a few days later and survey the situation. Turns out he knew a guy that had built this really cool contraption that acts as a vacuum and sucks the bees "gently" into an enclosed portable hive. After locating a gap between the wall and the ceiling that they had managed to find and use as access to the kitchen, he went to work cleaning out as many as he could. With the hopes of getting the queen as well. Mind you, during the main event I shuffled the girls out of the house and hung out at hubby's cousins until the coast was clear. 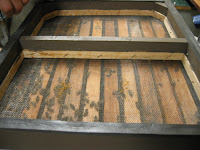 Now weeks later after sealing up what we thought was any and all entrances, the remaining guests seemed to have found another tiny way in. So back to sealing up tiny places. It's a shame to loose the queen and the remaining workers but without totally dismantling the wall we can't possible save them. We did save hundreds of them with the vacuum contraption and those have been introduced into a young hive that needed some more workers. It breaks my heart to kill the rest but we're in no position right now to start a kitchen remodel! Bees are becoming scarce in our region and it was surprising to find these. I welcomed the little guys since my garden benefited from the pollinating of the bees. But since they've arrived Jocelyn and Cleo have been stung and we can't go anywhere near that side of the house when the bees are active. I did learn a thing or two about the bees like how they only sting when threatened or they feel their queen is in despair. They one sting once and only use it as a last resort since it is a suicide mission. Once they sting they die. Unlike yellow jackets who will sting continuously and won't die unless you beat them with your shoe! 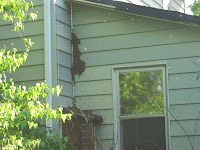 That blob you see on the side of the house is the large swarm of bees! YIKES!!!

It's been quite the experience, certainly a reminder to seal up those tiny little holes because you never know who might wish to make a home of it! 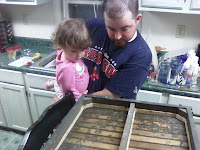 This one is Jocelyn's first close up look of bees in the portable hive.
Posted by Christina AKA SuperMom at 11:33:00 PM