Although the sun refused to shine today it turned out to be one of the best days I've ever had with my hubby! So ya it's been 5 years since I walked down that aisle and publicly agreed to love and cherish one man for the rest of my God given days. 5 YEARS! Okay so that may not seem like a big deal to you but in recent years with divorce rates on the rise and young couples barely surviving the honeymoon I say we're on a roll! 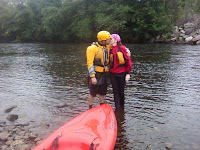 Tradition has it we watch our wedding video, go out to eat at Olive Garden, maybe see a movie, and retire early for bed. Not this year, we decided it was a year to really celebrate how far we've come, how much we've changed, and how much we love each other. So being that James is on the river every single weekend as a river guide in his kayak (that was his early birthday present!) I decided I wanted him to take me kayaking for our anniversary.

Can we just say so awesome! I loved it! A little anxious at times not knowing totally what I was in for but all in all it was great. James says I did a really great job although I think he's just being nice. I did freeze up for a second going through some rapids, I just stopped paddling for a second until I heard James scream "PADDLE!!!" Blink back to reality I was looking five feet in front of me and the only this I saw was a rock and a wave about to take me under. I survived and squealed and laughed all the way through it! 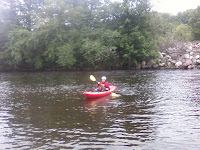 It was by far the best day I've spent with him. The quiet moments of nearly still water just taking in the panoramic views. A few King Fishers and plenty of ducks, and lets not forget the tourist taking pics of us from the banks of Jim Thorpe, that was kinda weird. I have a new respect for James on the river in his kayak. It certainly takes skill and an eye for the river.

Here's to many more years to celebrate and a love that just keeps getting stronger! (and here's one to those who said it'd never last! Now who's laughing!)
Posted by Christina AKA SuperMom at 10:04:00 PM